Want to Survive as an Entrepreneur? Solve Problems

It is true that the owners of Tolaram Group are not Nigerian, but their ability to build an almost one billion dollar company in Nigeria is not inherently tied to where they are from but to how they solve the problems that arise in their lives.

In the first Culture post, I spent time defining culture and putting boundaries on how we define it at our research institute here at Harvard. In the second post, I applied our understanding of culture to the events that happened at the NUMMI plant, a joint venture between General Motors and Toyota, in California. In the third post, I went way back and discussed how the culture of good governance emerged in Europe. All this while, my singular goal has been this — to demystify the complexity and rigidity that is associated with the word culture. As I wrote all three pieces, I hoped that as you read them you would understand that culture is malleable.

As such, where does that leave us? This Culture Series was born out of a post I wrote about a company, Tolaram Group, in Nigeria that is currently grossing almost $1 billion per annum by selling instant noodles. A packet of Indomie noodles is hardly an expensive or ingenious product and Nigeria is not a country that comes to mind when I think about billion dollar businesses. As I described how the company achieved such great heights in a tough environment, a brilliant commenter implied that the culture of the owners of the company must have played a role. And while he was right, the implication I got from the comment, rightly or wrongly, was that culture is innate and somewhat immutable. That led me to write this series.

It is true that the owners of Tolaram Group are not Nigerian, but their ability to build an almost one billion dollar company in Nigeria is not inherently tied to where they are from but to how they solve the problems that arise in their lives. Similar to the monarchs in Europe who evolved their culture based on what constituted success in particular circumstances, the leaders of Tolaram Group also have done the same thing in Nigeria.

The Economist and the Gujarati

This Economist article highlights the success of the Gujarati, an Indo-Aryan ethnic group with predominance in India, and to a lesser extent, Pakistan. It is easy to read the article and conclude that the Gujarati are born with business in their blood. But my hope is that understanding the true meaning of culture and how it impacts people, organizations, and ultimately countries will dispel this myth. The second paragraph in the article provides insight for us to better understand how the Gujarati culture began to emerge. It reads

Flush with success, Visram was later joined by another Gujarati, Vithaldas Haridas. He arrived in 1893 and was, if anything, even more adventurous than his mentor; he stomped 24 miles through the jungle to the small town of Iganga, where he started his own shop. More followed. These were the beginnings of some of the larger fortunes to be made in colonial Africa.

The first sentence is telling. If Visram was not “flush with success,” Vithaldas might not have joined him. In other words, for more than 200 years, the idea of hard work has been linked with success in the minds of the Gujarati and this link has been passed down to them from one generation to the next. This does not take anything away from the Gujarati of today. If anything, it is a testament to the fact that they can hold on to a difficult cultural practice of excellence for such a long time.

What if you are not Gujarati?

So what happens if you are not Gujarati or more importantly if you are not born into a culture where hard work, enterprise, and fortitude have a storied history? We propose a framework that Edgar Schein and John Shook have popularized. 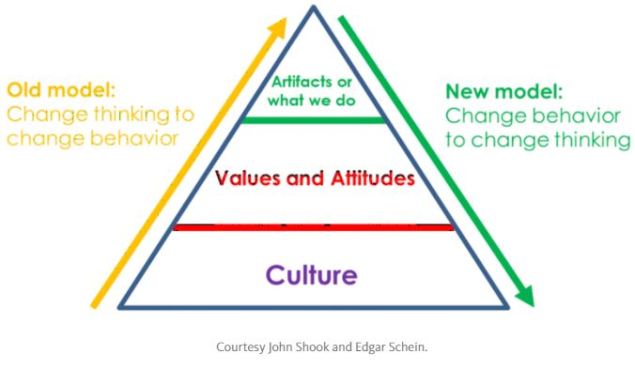 The notion that we must change our behavior in order to change our thinking is one of the most important things about culture. As I wrote in the first part of the Culture Series, changing behavior can happen when the rules of the game and what constitutes success are redefined. Culture cannot simply be wished into a situation. It takes time, effort, and conscientiousness to build. But it is possible. Remain hopeful.

Got something to say? Go for it!

This site uses Akismet to reduce spam. Learn how your comment data is processed.